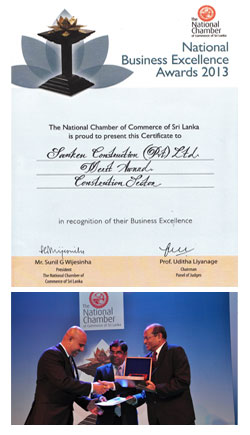 The National Business Excellence Award is an annual award competition conducted by the National Chamber of Commerce of Sri Lanka (NCCSL) with a view to recognizing business enterprises, which have demonstrated excellence in business, whilst contributing to the economic progress of the country.

NBEA was introduced by the National Chamber of Commerce of Sri Lanka as an overall business bench-mark competition where business organizations could bench-mark their performances against others in similar business.

The NBEA which is held for the ninth consecutive year recognizes businesses that contribute to the socio-economic development of the country while adopting exemplary business practices. The award conducted by the NCCSL was first held in 2004.

We are proud to announce that Sanken Construction has been honored by a Merit Award in the construction sector at National Business Excellence Awards (NBEA) 2013. This was awarded at the award ceremony held on 27th November 2013 at Colombo Hilton.