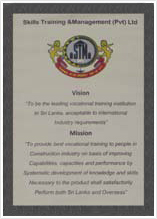 Skills Training and Management was formed to give knowledge to rural youth to develop their skills and training an expose them to our own projects as well as outside work.

The Group is conscious of its role as a corporate citizen and has over the years contributed towards selective activities that benefit community. The principle of association and support given to a ‘cause’ is based on the least publicity the Group would get in the process. In the past, the ethnic crisis caused a lot of trauma and pain to many and the Group took the opportunity to support in specific areas. This led to a program where amongst other welfare activities carried out in collaboration with the relevant authorities. Valuable training that included establishment of a vocational center so that the center could continue uninterrupted following the loss and damage of its training equipment. This benefited many local youth who depended on the facility for their career development. Livelihood projects were also funded wherein provided tools and equipment to continue with their vocations. Several masons, Carpenters, Electricians and Seamstress benefited by this program. The CSR program was conducted in association with the Local Projects and Overseas Projects.